This summer corn salad is fresh, crisp, and easy. It’s a delectable way to utilize some of the best harvests of the season; corn, tomatoes, and bell peppers. These ingredients are all sweet in flavour so I find balance with a little warmth from a hot pepper, creaminess from the avocado, and zing from the lime. It’s healthy, clean, and delicious.

This is my favourite summer salad. Scratch that, this is my favourite August salad. I crave this bowl of goodness starting in late June when it’s just starting to feel like summer, but we absolutely have to wait until Taber corn arrives at our farmer’s markets to plan the making of this recipe. I’m a bit of a corn snob, as we all are around here, corn from the Taber* area is the best corn! So, we wait!

I started making a version of this salad several years ago for a summertime soiree, I’m sure. I grabbed whatever produce was in the fridge and diced it up and tossed it in a bowl together. The dressing was inspired by an option at a Mexican fast food place I’d recently tried. It was delicious and I wanted to try making it at home. I’ve been making this salad multiple times every summer since, improving it every time I make it. I think I’ve perfected it now.

How to Grill Corn on the Cob

One of my favourite scents of the summer is when I have corn grilling on the barbecue and the aromas waft into the house. You know the intertwined smell of newspaper and cedar kindling when you’re starting a campfire? It kind of smells like that. It’s the sweetness of the kernels steaming through the corn husks that are deliciously charred.

The husks are a magic, by the way. You don’t have to pre-soak them to grill the corn, they hold enough moisture to take care of the cobs while they’re cooking. You just carefully peel each individual husk leaf back like you would on a banana and keep them attached at the shank. Remove all the silk strands, then draw the husk leaves back up around the cob. If the husk isn’t staying where I want it to, I’ll take an extra leaf and tie it in the middle like a robe, or collect all the ends and tie it up like a ponytail. That’s it. That’s the corn prep.

I like cooking the corn this way because we only have so long to utilize the grill here, I like the smokey flavour it gives the salad, and there are no dishes! You don’t have to grill the corn though, you can cook it however you like, the salad will still be just as good. I promise. I’ve tested that out.

Ingredients for a Simple and Quick Corn Salad

While the corn is grilling, cut and prepare all the rest of the ingredients.

I like to dice up all the vegetables to be approximately the same size as the corn kernels, so each ingredient has equal space on your fork and each mouthful is balanced. All but the Anaheim pepper, I dice that one smaller so there isn’t too much heat per bite. More like warmth.

The dressing is really simple to make. (Honestly, is it even a dressing? It doesn’t have mayonnaise or oil, it isn’t emulsified…) I just pour the ingredients straight into the bowl after the warm corn goes in and toss the whole lot together.

What to Serve with Summer Corn Salad

I make this almost every week during corn season and we have it on the side of anything and everything; chicken, salmon, steak, shrimp, or scallops would be a few examples.

Be prepared to eat up most of the salad the same day or the next day. The lime will keep the avocado from turning brown, but not for too long. When you put the salad in the fridge, cover it with a bit more lime juice and a splash of water.

Should you want to make this salad ahead of time, which I would recommend to allow the flavours to meld, add the avocado and cilantro right before serving.

This salad is bright and vibrant, sweet and warm. Sounds like summer in a bowl. Please make this as a side for your next dinner at home and let me know what you think! 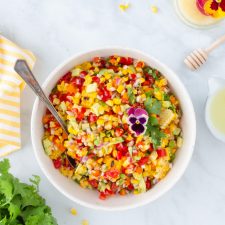 *Taber is a small town and Municipal District (kind of like a county) in Southern Alberta that is considered to be the Corn Capital of Canada. The MD is rich in several agricultural businesses but famous for their corn. Taber is located in the sun belt of Canada, an area between Calgary, AB and Estevan, SK, that records the most sunlight per year. They say that the abundant levels of sunshine warming the soil throughout the day paired with the crisp and cool temperatures during the night draw out the natural sugars in the corn. Thus producing the best damn corn you’ve ever tasted.

I’m partial to the corn from Johnson Fresh Farms, but make sure you check their website for official selling locations. Also ensure you look for the certificate of authenticity which should be posted at every stand or truck. The corn game is so intense that there are folks selling subpar corn and trying to pass it off as Johnson’s!

This site uses Akismet to reduce spam. Learn how your comment data is processed.

Hey! It is nice to meet you!